Taking up the international challenges: How the social business phenomenon impact on emergent collaboration 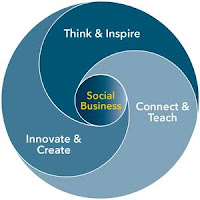 The social business phenomenon and the emergent collaboration

In 2010, I had the good fortune to interview several employees of Kaiser Permanente, the California-based health care company. Among this group was a young manager named Karin Cooke, who developed IdeaBook, a software tool that allows KP employees to share and discuss their ideas about modifying products, service and process in use at KP. At first, a few people were invited to use the tool, but demand was so great that the transition from pilot to enterprise-wide launch took place much faster than expected.

The enthusiastic reaction to Ideabook was eye-opening to me for two reasons. One was because I could not imagine myself using such a tool. I can be private, and skeptical about new ways to do my job.

The other reason was more conceptual than personal. The speed with which IdeaBook was adopted at KP suggested a kind of hunger among KP employees. Not merely a hunger to connect to others, but also to give voice to their own ideas and to be heard. Not just by a few, but by thousands.

These motivations correspond to a list of three basic psychological needs developed by researchers at the University of Rochester (where I did my graduate work in philosophy):

•Connecting with others,
•Feeling self-determined in directing one’s actions and
•Having a sense of competency about what one does.

All are essential to an individual’s well being, according to these researchers. That social media might be enabling new kinds of worker satisfaction is exciting, especially since these kinds of collaboration are happening in many industries and in government, even at the Central Intelligence Agency.

There is a great deal of hype about social media’s impact on the marketing function, and while it is true that in many businesses social media starts with the business to consumer relationship, it may be that the greater promise of social media, and the collaboration it enables, is enhancing organizational performance. This is one of the key areas we are going to analice. We will consider questions such as:

•Does the promise of social business consist more in the internal uses of social media tools or in the better known business to consumer dimension?

•If the former, what exactly is the promise of social business, and what are companies doing to realize that promise? What are the cautionary tales?
•What are the most important factors and metrics for success?

In less than a decade, we have witnessed the launch of Wikipedia (2001), the IPO of Google (2004), and the creation of Facebook (2005), and Twitter (2006). Also, in 2006, Andrew McAfee coined the phrase “Enterprise 2.0,” in his MIT Sloan Management Review article “Enterprise 2.0: The Dawn of Emergent Collaboration.” That article offered a seminal early perspective on the use of social media within business. Today, a Google search of “Enterprise 2.0” garnered 3.17 million hits.

Putnam’s picture of a fragmented, disconnected society resonated so much with so many that he was invited to Clinton’s White House to discuss it.

Today, however, there are so many ways to connect to one another that there is, if anything, relational overload. With the proliferation of new social media tools and their rapid adoption within business, this decade-long run with social tools shows little sign of slowing.

Of course, the historical drivers of these social trends, especially in the business context, are complex. At a minimum we will want to understand the key social business-related management lessons that have emerged since the bygone era of executives riding executive-only elevators to mahogany-paneled executive suites where they oversaw their vertically integrated companies and dictated product features as they saw fit.

(Recall Henry Ford’s famous remark that customers could have a Model T any color they wanted so long as it was black.)

Will social business spur new organizational forms and new approaches to human capital management? Who knows? Perhaps making better use of the human social animal will prove to be the most enlightened next step in the evolution of modern capitalism.